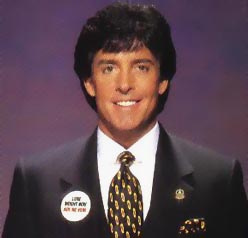 On January 9 I received an email from a business collegue of mine who tells me about Herbalife being attacked by a stock trader.

I immediately forward this to Tim who is too busy to fight back this issue. (see our correspondance below)

None of us are working with Herbalife, but this Herbalife attack is really bad for the company but also for the industry. I decided to send this to another partner of ours who harassed Tim for days about this issue.

The result: Tim finally decides to shoot the video below that is going to become a classic in explaining the viability of MLM. 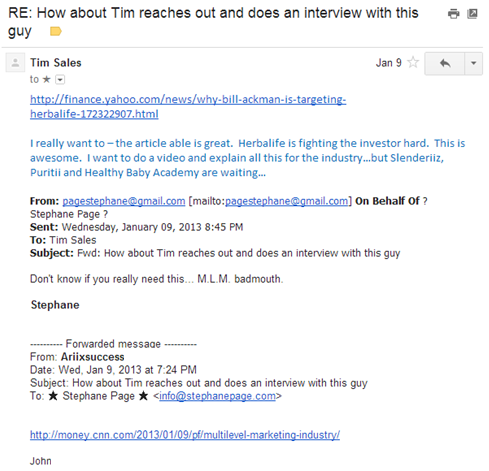 If you know Tim, he’s been defending the MLM industry for several years. He’s been in court helping companies, he defended MLM in countries where they don’t want to let MLM companies operate, he helped reps build MLM in a first class way where most of the time their upline isn’t providing the right training, etc.

Once again, Tim Sales has come out in a big way, making a huge splash for the entire network marketing industry where he defends Herbalife. They’ve been under a heavy media attack due to the actions of one man with a hidden agenda.

He exposes who is behind this attack, why he is attacking, and most of all what Tim tells all network marketers to do now.

But to give you just a brief idea:

There is a man by the name of Bill Ackman who has been spreading false information about Herbalife in an attempt to bring down the value of their stock.

Tim exposes the man behind the Herbalife attack and what his real motive for the attack is! (The millions of dollars he’ll stand to make). He explains why and how Ackman stands to make millions by bringing down the value.

Tim’s video has been getting so much attention across the social media networks these past couple of days that I’m sure some of you have already watched and shared. People from all over the world are jumping on the bandwagon, in support of Herbalife, in support of their own companies, in support of the entire M.L.M. Industry.

I can’t even begin to tell you what a hero Tim is when it comes to defending this industry and all that it stands for. It is the reason why I became a personal friend of Tim and started to work with him in buinding an organization together in a new company a few short months ago. Tim cares and Tim knows what he’s doing! Most of all he does it better than anybody in the industry!