Every prospect has its peaks and valleys. People are more or less interested in your business at different times or based on information they reviewed. Some of these highs and lows we can, and must, control if we want to be Network Marketing Professionals.

In my years of studying Top Networkers, I discovered that all of them have mastered one thing with their prospects: consistency. They are consistently consistent. They’ve learned how to minimize the emotional highs and lows their prospects are experiencing as they are evaluating the business. This is one of the most important prospecting tips you will get as you learn how to recruit more and more people.

Simply put, Network Marketing Professionals don’t let their prospects get caught in the emotional roller-coaster ride. Why? Because more than anything else, the emotional ups and downs of your prospects prevent them from committing to their dreams and goals.

The vertical side of the graph represents a person’s level of enthusiasm, and 10 represents the most excited and the most enthusiastic one could possibly be. You may have been there yourself. Or maybe you’ve witnessed someone new to the business who’s so excited you have to scratch them off the ceiling! Their mouth is unable to keep up with what’s going on in their head.

One Of The Worst Prospecting Tips: Throw Them Against The Wall And See Who Sticks

Let’s use the example of a brand new prospect and let’s call him Mark. Mark has just watched a video and he’s extremely excited. This is exactly what he’s been looking for his entire life. What an amazing concept, he can’t believe he didn’t do this before!

Hot? You bet. Excited and enthusiastic? No kidding.

Then Mark talks to his spouse, the first person who should get excited on his list because she always complain they don’t have enough money. And guess what?

“Are you out of your mind? These things don’t work. They’re illegal Mark. How could you have been so blind? We’re going to make these other people rich on our back.”

Mark is a bit disappointed (and knocked down a couple notches to an 8), but the person who invited him to watch the video, warned him to not tell anyone about this and instead let the video explain for him.

Over the next few days Mark is busy with work. He gets back home exhausted. His early enthusiasm for the business is now a 6.

Fortunately his sponsor calls him to invite him to another event where he’s going to meet Jackie who’s a top income earner who worked in the same field Mark worked in. Suddenly Mark is back to an 8.

Then the car breaks unexpectedly and the money he thought he would use to get started goes down the drain. Before you know it Mark is talking himself out of the business.

If we look at the graph, we can see Mark’s fluctuating levels of enthusiasm. It looks like a roller-coaster. And if more time passes by, he’ll never join. He’ll abandon his goals and dreams. 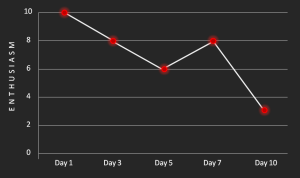 Back when Mark was a 10 and bursting with enthusiasm, there was something missing. Something fundamental and vitally important.

It’s called belief, and even if the person is at it’s peak in excitement and enthusiasm, if it’s not backed by a similar level of belief, there is little to no chance the person will do anything.

Enthusiasm must equal belief. Very similar to gravity, no matter your level of enthusiasm, your beliefs will pull your excitement down until they both match.

The reason Mark lost interest even though he was super excited initially is because his belief pulled him down to his reality.

You see, even if Mark’s enthusiasm was high initially, his belief level was around 3 or 4.

Getting someone excited for a brief moment because of some high energy experience or a few moments of motivation is easy, but if that person doesn’t believe they can do it, they will walk themselves out of the game.

The 3 beliefs one must have:

It’s easy to gain belief in the company and products. You can hear testimonials, learn about the company vision, the good they do in the world, the life-changing products and how they pay attention to the formulations of the products.

Developing belief in network marketing is a little bit more complex because of the perception people may have based on themselves trying it in the past or people they know who have quit. The truth is network marketing works for those who learn how to prospect, invite, present and train effectively.

The challenge is getting your prospect to believe THEY can do it. Think about it… If they knew for a fact they would succeed, they would do it.

It takes just a few doubts coming across your prospect’s mind to lose them.

When there’s too much of a gap between their enthusiasm and belief, they become vulnerable to being bounced up and down the emotional roller coaster.

Professional Networkers keep their prospects above 8 on the enthusiasm chart and do everything they can to raise their prospect’s belief to an 8 as well. They constantly work on the gap between enthusiasm and belief. 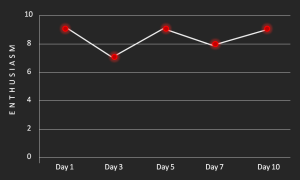 Providing their prospects with information and events that will increase their belief is the key to the Professional Networkers.

Not only is this article one of the many prospecting tips I share with you, it’s also one that will serve you well personally. Here’s why…

Raising belief also is what Professional Networkers do themselves for their own business. They understand that they need to constantly feed their belief in all three area if they want to be MLM success stories.

2 thoughts on “Prospecting Tips: How To Keep Your Prospects Hot”